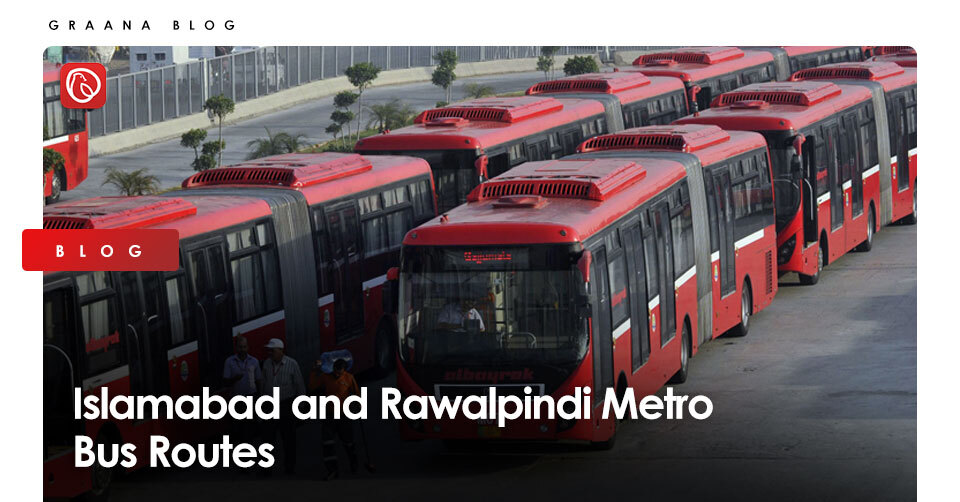 Until recent times, public transport in Islamabad was generally in shambles and required the urgent intervention from the government.

Therefore, based on research and various studies conducted by the Punjab government and the Capital Development Authority (CDA), the provincial and federal governments joined forces in the early 2010s to launch the Islamabad metro bus project.

The goal was to connect Islamabad and Rawalpindi and to relieve traffic congestion on the corridor.

In 2014, the Prime Minister of Pakistan and the Chief Minister of Punjab co-chaired a meeting in which the federal and Punjab governments approved the project on a 50:50 sharing basis.

The Islamabad metro bus route construction began in February 2014 and was completed in June 2015. The Rawalpindi Development Authority was tasked with overseeing the project, which cost approximately PKR 44.31 billion.

Graana.com, Pakistan’s smartest property portal, takes a detailed look at the metro bus routes in Islamabad: how the project was conceived when was it completed, and when the airport route will become functional. 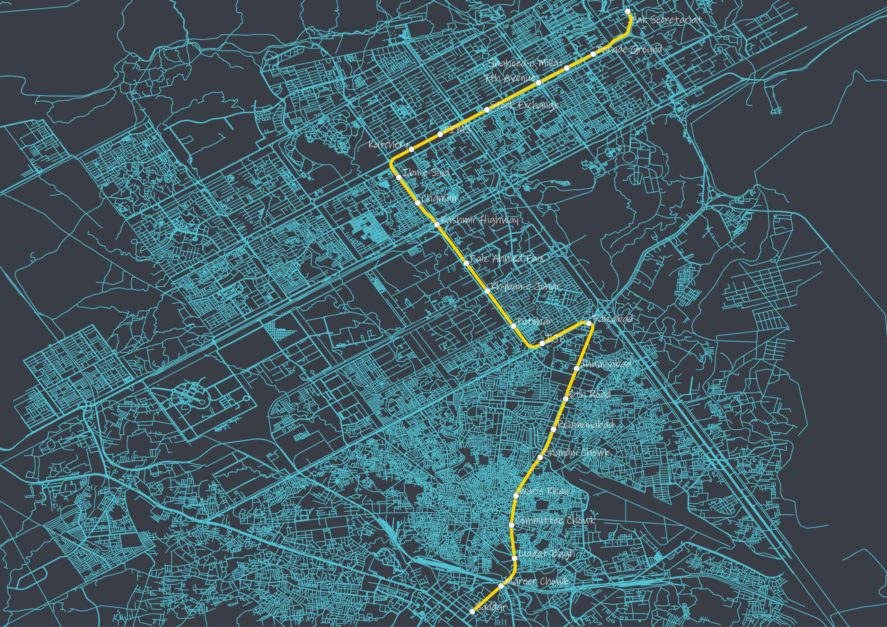 Line 1 became operational in June 2015. It starts in front of the Pakistan Secretariat, cuts through the center of Islamabad, and ends at Saddar, the commercial center of Rawalpindi.

The stations or metro bus stops on the route are: 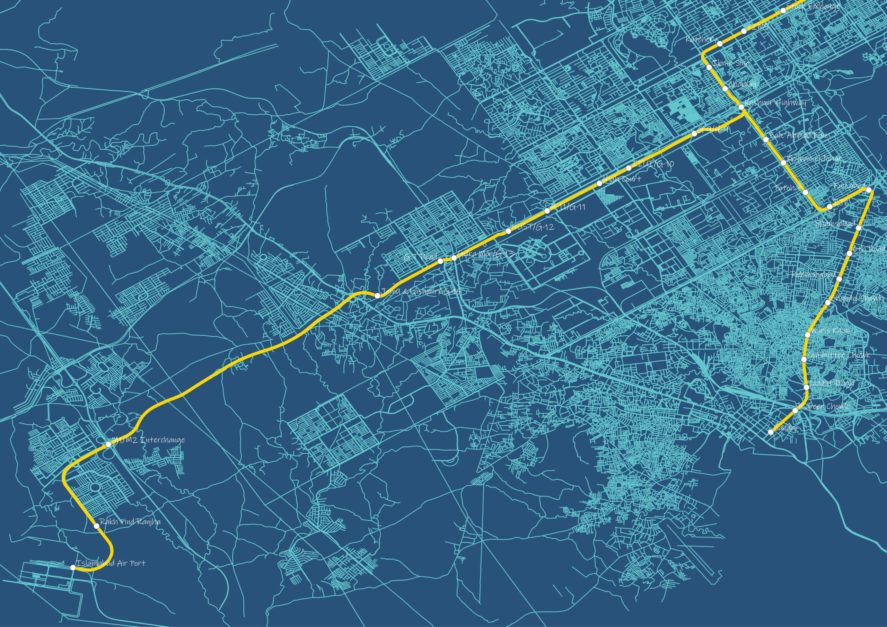 The 27-km line 2 from Kashmir Highway metro station runs parallel to the Srinagar Highway, and ends at the new Islamabad International Airport. As seen in the above metro bus route map the bus stops in line 2 are:

If you are thinking of the metro bus timings the Islamabad metro bus service operates from 6:15 a.m. to 10:00 p.m. The system employs an Intelligent Transportation System wand as well as an e-ticketing system.

The Punjab Metro Bus Authority (PMBA) manages it, while the Punjab IT Board manages the automated system.

Since they are both parts of the same transportation system, the Rawalpindi metro bus timings are also the same.

Aside from that, there are ticketing booths, escalators, toiletries, platform screens, turnstiles for automatic fare collection, and other amenities that help passengers travel safely and easily. There is also a central ITS control room, which monitors the entire operation of the bus rapid transit system.

Passengers who travel by metro bus in Islamabad are generally pleased with the modern amenities, such as air-conditioned buses and free WiFi.

How to Buy a Ticket for Metro Bus Service

Passengers using public transportation in Islamabad must have a fare media, which is either a token or a metro bus card. This can be purchased or recharged at the various metro bus stations’ ticket offices or Ticket Vending Machines (TVM).

To purchase a token from the TVM, first, select the number of tokens desired, enter the required amount (PKR 30 per token), and then take the receipt and token.

The metro bus card, on the other hand, costs approximately PKR 130. Passengers can return the card and also reclaim the deposit, but only if the cards are in good working order.

When a metro bus card is tapped on the turnstile bay, the passenger has only 30 seconds to pass through. If you do not pass in those 30 seconds, the trip fare will be deducted.

Additionally, when you tap the card at entry and exit points, it displays the remaining balance.

Buying a Ticket or Card

Both the metro bus card and token serve the same purpose, but the card is more suitable for someone who commutes daily to school/university or their workplace as they won’t have to wait in line for a token.

On the other hand, a token is good for a single trip as it has a time limit of about an hour, after which the token is not accepted at the turnstile.

In case the token runs out of time and the person has not exited from the turnstile, he or she is charged with 50 rupees that have to be paid in cash on the spot. The same process is followed if the token is lost by the carrier.

There are 12 bridges, 26 culverts, and 11 underpasses in the metro bus project.

The National Highway Authority (NHA) has requested PKR 1.5 billion from the federal government to complete the project and estimated that the commuters who were paying PKR 500 to PKR 1200 to taxis would benefit the most.

The project had originally begun in January 2017 and was to be completed in four phases:

However, as of March 2022, the project has yet to be inaugurated.

The New Islamabad International Airport, with its modern infrastructure and facilities, is the country’s largest airport.

According to a recent news report in The Express Tribune, “nearly 90% of the work has been completed as the bus corridor is ready for use, while the finishing work on two of the total seven bus stations was pending.”

The Work Goes On

The metro bus service is open today as the airport route of the capital city’s metro bus system is currently being extended from the Kashmir Highway metro station to Islamabad International Airport, as originally planned.

It will significantly improve connectivity between the airport and many key areas of the city, making daily commutes easier. A shuttle bus service will be used to connect the Kashmir Highway metro station, which serves as the route’s starting point, with various parts of the capital.

The National Highway Authority (NHA) completed work on a 27-kilometre road for the new metro bus route last year at a cost of PKR 16 billion.

The purchase of 30 new buses for the Peshawar Mor-Islamabad Airport BRT route is currently in progress.

The Capital Mass Transit Authority (CMTA) is also being formed to oversee the operations of Islamabad’s metro bus service. The Capital Development Authority will directly manage and control the CMTA once it is established (CDA).

At Graana blog, you can find more information on all the latest construction projects in Pakistan. 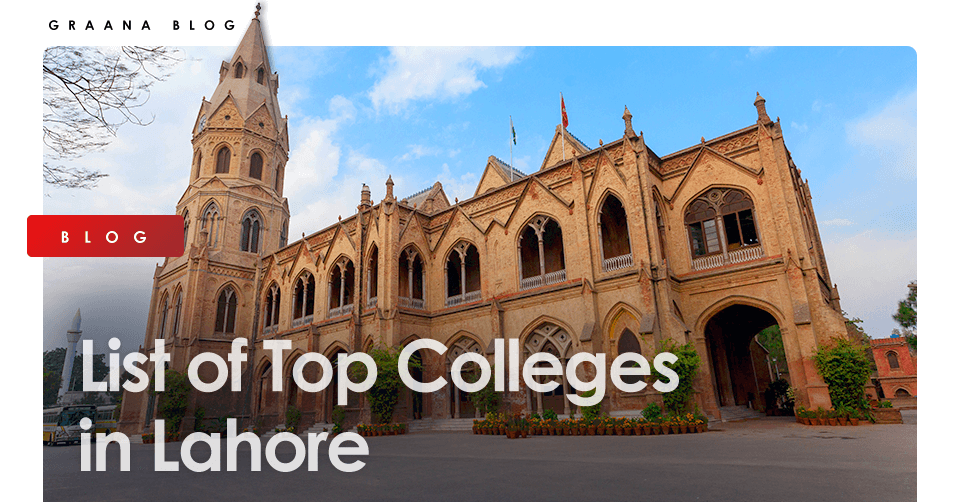