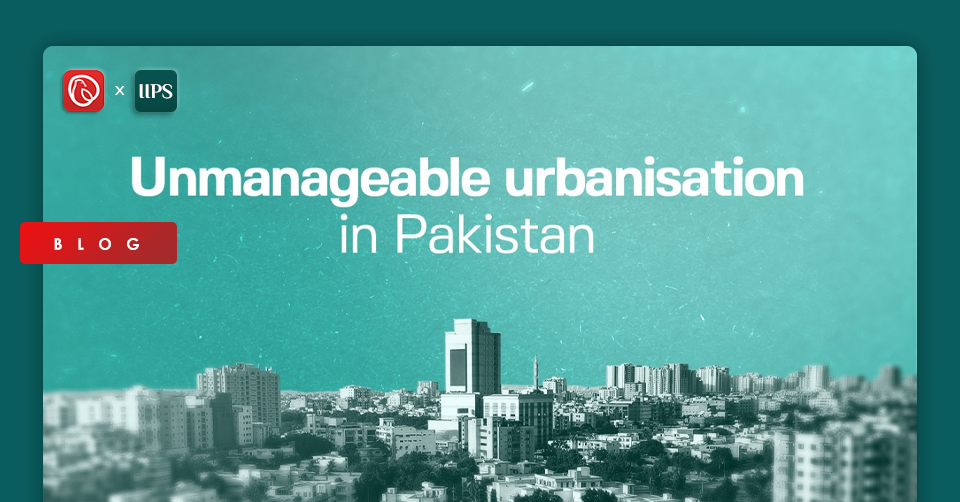 The uncontrolled urbanisation is fast becoming a nuisance for the people living in major cities of Pakistan. This blog by Iqbal Institute Policy Studies (IIPS) discusses the main drivers of urbanisation and the subsequent challenges faced in the health, housing, and transport sectors. The role of government in mitigating the harmful effects of urbanisation and the private sector’s efforts in spreading urban amenities to rural areas are also highlighted. Lastly, suggestions are presented to tackle the problems associated with urbanisation in Pakistan.

According to Hassan et al. (2018), Pakistan has the highest rate of urbanization in South Asia, with 36.4 per cent of the population living in urban areas. A rapid increase in the population rate coupled with massive rural to urban migration during wars has led to the deepening of Pakistan’s urban crisis. Among a plethora of problems which emerge in face of urbanisation, housing, transport, and public health stand out as the most negatively affected areas. With new migrants being forced to join squatter settlements and failure of the public and private sector in solving the housing crisis, urbanisation is increasingly becoming a challenge rather than a source of achieving economies of scale, localisation, and infrastructure development. Therefore, as Pakistan faces a crisis of housing, health, and public transport due to speedy urbanisation, prudent measures must be taken in order to mitigate its harmful impacts.

Drivers of Urbanisation in Pakistan

Urbanisation can be defined as the process by which a large number of people become permanently concentrated in relatively small areas, forming cities (Britannica, 2020). Pakistan is among the most urbanised countries in South Asia (Shaikh & Nabi, 2020). On one hand, urbanisation has the potential to open up economic avenues for development and at the same time, urbanisation can also perpetuate socio-economic inequalities and conflicts. Unplanned population growth and excessive rural to urban migration are the two primary factors which are responsible for Pakistan’s unmanageable urbanisation. Looking at the average fertility rates in Pakistan, the population could increase from 210 million to 380 million by 2050 (Muhammad et al, 2020). As cities become hubs of economic activity in an era of industrialisation, many Pakistani’s living in rural areas also migrate to urban centres in search of better livelihoods.

Three areas are most affected by rapid urbanisation, namely housing, transport, and public health. Housing is not only a fundamental human right; it is an essential requirement for all economic activity. Scores of poor, jobless, and newly arrived migrants are forced to join squatter settlements as a last option for their survival. This is primarily due to the failure of the public and private sector in solving the housing crisis of Pakistan. Land prices are too high for the low and middle class as housing policies have produced plots that are often hijacked by speculators. In the absence of land titles, there is also an increasing fear of evictions. The State Bank of Pakistan estimated that across all major cities, urban housing was approximately 4.4 million units short of demand in 2015. If current trends continue, Pakistan’s five largest cities will account for 78 per cent of the total housing shortage by 2035 (Shaikh & Nabi, 2020).

Urban transport also remains a significant challenge due to the rapid urbanisation of cities. A large number of public funds are spent on roads, flyovers, underpasses, interchanges, and other urban infrastructure for automobiles. However, only a small percentage of Pakistan’s population can afford to own a car. Public transport is a need for the majority of urban residents, but this service is usually of subpar standards or unavailable in most urban areas.  The public sector hardly operated any public transit until the recent launch of the rapid bus transit systems in Lahore, Peshawar, and Rawalpindi/Islamabad. The demand for public transport usually generates from the middle class, who are also willing to pay for better service. Lastly, poor quality control, failure to strictly enforce traffic rules, and lack of regulations for vehicles exacerbate the already intense crisis of transport. Municipal governments also lack the capacity and technical expertise to manage transport efficiently.

Public Health is another major urbanisation challenge. People living in urban areas are more susceptible to non-communicable diseases due to their lifestyle, eating habits, and low levels of physical activity compared to rural dwellers. According to Heartfile research, eighty-three per cent of urban-based women and about eighty per cent of urban-based men say they are physically inactive (Nishtar, 2014). A plethora of environmentally-related problems also strikes the urban population. High levels of air pollution lead to smog in some parts of Punjab and with a COVID-19 pandemic looming on Pakistan, this becomes a major source of illness and disease among the population. Furthermore,  waterborne diseases are rife in Pakistani urban areas due to an ineffective sewerage and garbage disposal system. This places an added burden on the public health infrastructure, which is already a victim of low funding and poor regulatory oversight.

Although the government’s role is questionable in regulating the rate of urbanisation in Pakistan, some important steps are being taken to resolve the issues of urbanisation. Pakistan does not lack urban policies; rather, it was a pioneering country to adopt physical planning and housing policies as its development strategy. Yet a lack of legal framework and institutional resolve has often kept them from being implemented properly. Policymakers also fail to understand the nuances of transport demand. But steps have been taken to address urbanisation. Updating and upgrading of master plans of major cities, developing urban security technologies, environmentally friendly mass transit facilities, and provision of urban amenities in rural areas to address rural to urban migration are some of the commendable steps taken by the government to offset challenges posed by urbanisation (Ibal, 2013).

The private sector in Pakistan also contributes to this urban-rural nexus. Technology and financing are facilitating the spread of urban lifestyle in rural areas. Services like microfinancing are increasing access to resources previously associated with only an urban centre. Banking, education, energy, and healthcare are also increasingly expanding to rural areas. This enables people in rural populations to adapt to a lifestyle which is in accordance with their urban counterparts. The government also looks forward to public-private partnerships in providing essential services like education, transport, and health. One important step worth mentioning is the public-private partnership between telecommunication companies and the city’s Water and Sewerage Board to inform people about water-saving tips and strategies (Kugelman, 2014).

In order to address the manifold challenges of urbanisation in Pakistan, firstly, the definition of ‘urban’ needs to be expanded. This will help include high-density rural areas which possess qualities like brick homes, internet penetration, and all the trappings of urban life. Pakistan will therefore have a better picture of its urban population and will allocate funds accordingly. Pakistan should also look to other developed and developing countries to take effective strategies in urban management. More research is needed to fill knowledge gaps and better understand cities, ultimately leading to better policies.

Institutional reforms are also needed in Pakistan, and the role of bureaucracy should be revamped. Better access to training on urban policies will also improve policymaking. Pakistan’s urban land laws are also poorly defined. Laws should be passed, which distinguish clearly between public and private land rights. Pakistan should also develop guidelines for governing urban areas. Principles of transparency, responsiveness, equity, and inclusiveness should be incorporated in transport and health facilities. Lastly, as the public sector lacks the required funds for effective urban management, public-private partnerships should be utilised to their maximum potential.

Urbanisation has the power to open up the economic development of a country, but at the same time, it becomes a cause for many socio-economic problems. Overpopulation and rural to urban migration are the two main significant factors which fuel urbanisation in Pakistan. Housing, transport, and public health are the most affected areas. Squatter settlements, lack of public transportation, and a weak health infrastructure contribute to the growing problems of city dwellers. Pakistan can therefore look to other developing and developed countries to extract models of urban management and sustainable development. Pakistan remains a pioneer in developing housing and physical planning strategies and if proper attention is given to the sector at present, there is hope that Pakistan can solve its urban crisis.

Pakistan has the highest rate of urbanisation in South Asia, and according to the 2017 Population Census, 36.4 per cent of the population lives in urban areas.

Urbanisation has the potential to open up economic avenues for development. At the same time, urbanisation can also perpetuate socio-economic inequalities and conflicts.

Scores of poor, jobless, and newly arrived migrants are forced to join squatter settlements as a last option for their survival.

A large number of public funds are spent on roads, flyovers, underpasses, interchanges, and other urban infrastructure for automobiles. And yet few Pakistani’s can afford to own a car and certainly not the poor.

People living in urban areas are more susceptible to non-communicable diseases due to their lifestyle, eating habits, and low levels of physical activity compared to rural dwellers. 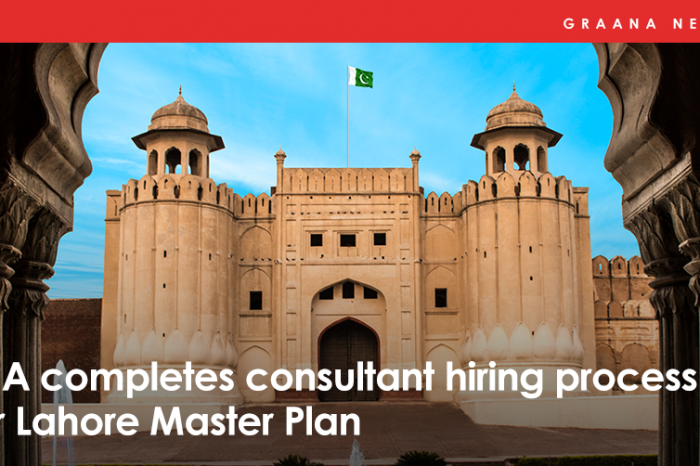 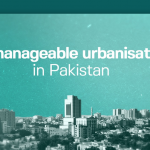