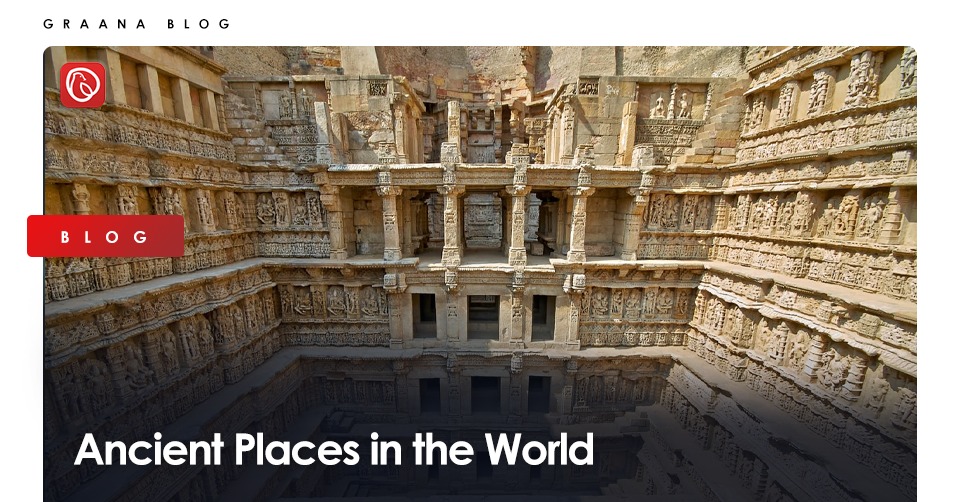 The world is full of places that showcase the history of civilizations, and the mesmerizing work of art that is standing afoot to this day. These places mesmerize travellers from all around the globe and attract archaeologists due to their significance.

All the remarkable historical places are of great importance and provide a chance for people to study and experience the culture of ancient civilizations.

In this blog, Graana.com will list down some best ancient places in the world to add to your bucket list and get an experience of a lifetime.

The first ancient place on our list is Stonehenge. It is located in the United Kingdom near Salisbury and was built nearly 3000 years ago.

This is known to be a mysterious prehistoric monument that piques the interest of historians and archaeologists for its placement and architectural shape. The large stones forming a circle were brought miles away from Wales, each stone is 13 feet high and 7 feet wide, with a weight of 25 tons.

More than one million tourists every year visit this place to experience the historical significance of ancient architecture. This ancient place has many myths attached to it, therefore the exact purpose of Stonehenge has never been figured out.

Some say it was a place to practice religion, whereas others believe that it was an astronomical observatory in ancient times. People who reside in London can take a direct train from Waterloo to Salisbury and reach Stonehenge in one and a half hours.

The Colosseum and Roman Forum 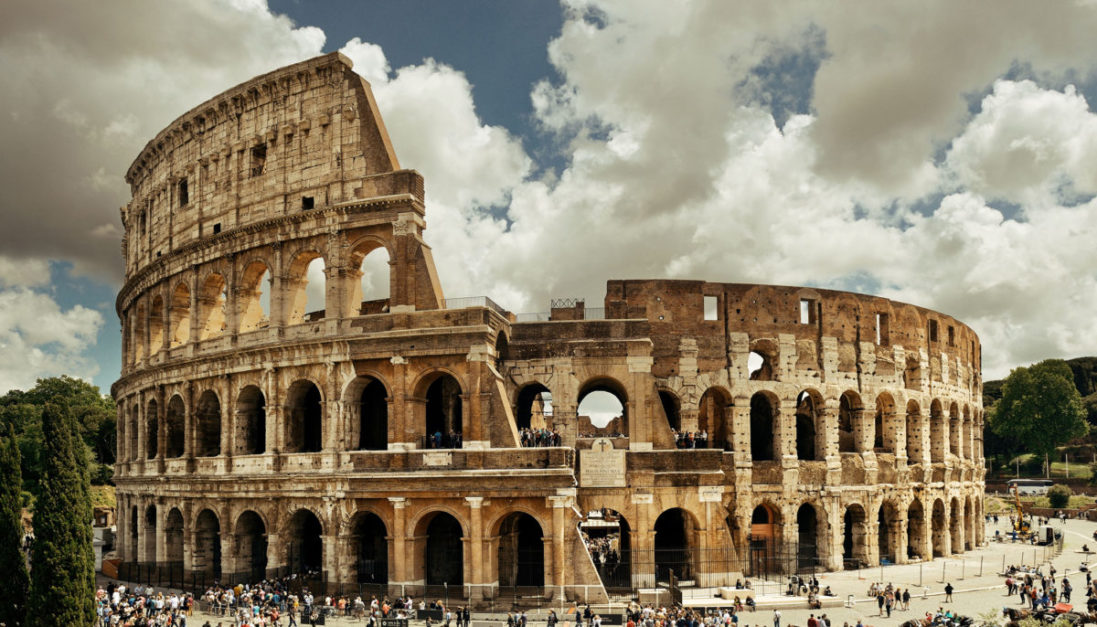 Identified as the crown jewel of architecture,  the Colosseum and Roman Forum in the city of Rome, Italy; are two very well-known ancient places in the world.

Both the historical places are considered to be the most popular places in the world for tourists, they are located right next to each other.

Colosseum, the largest amphitheatre in the world, was an extremely important site in Rome, it was built between 70 to 80 AD. The reason for its importance is that it used to hold public executions, gladiatorial contests, dramas, and battle reenactments.

During that time, the Colosseum could accommodate up to 80,000 people at once. Later on, this historical place was used as a fortress and quarters for a catholic order. Besides being one of the most iconic ancient structures in Europe, the colosseum has been a victim of massive damage due to the earthquake.

Roman forum; a rectangular complex, in ancient Rome was used as the main marketplace. It was used for social religious activities and it is the only largest ancient building from Roman times.

The location of this ancient building is in the centre of several other prominent ruins, the giant building had five arches initially but till now only three have been able to survive. 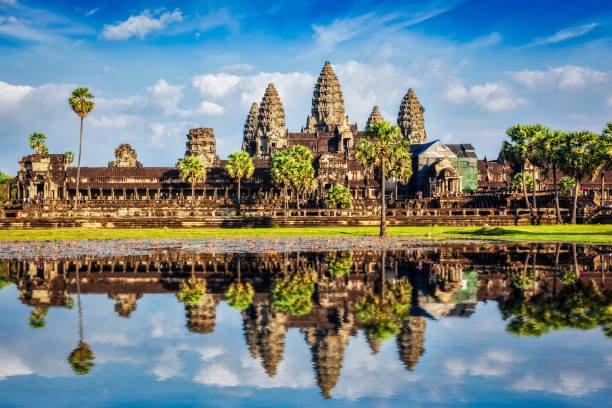 Angkor wat located in Cambodia is known to be the largest religious monument and one of the most beautiful ancient places in the world. It is in a unique jungle setting, near the city of Siem Reap.

The stunning architectural building was built in the 12 century by King Suryavarman II which took almost 30 years.

Angkor Wat is an enormous Buddhist temple. It has temples in different shapes and sizes in a mystical appearance trapped up by trees and roots.

Angor Wat is one of the greatest cultural wonders of the world. It covers up to 400 acres of land and is considered to be the world’s largest religious structure of Hinduism the temple was dedicated to the Gods Vishnu, Brahma, and Shiva.

According to Hindu mythology, the five towers of Angkor Wat symbolize the peaks of Mount Meru, which means the dwelling place of Gods.

Acropolis of Athens in Greece 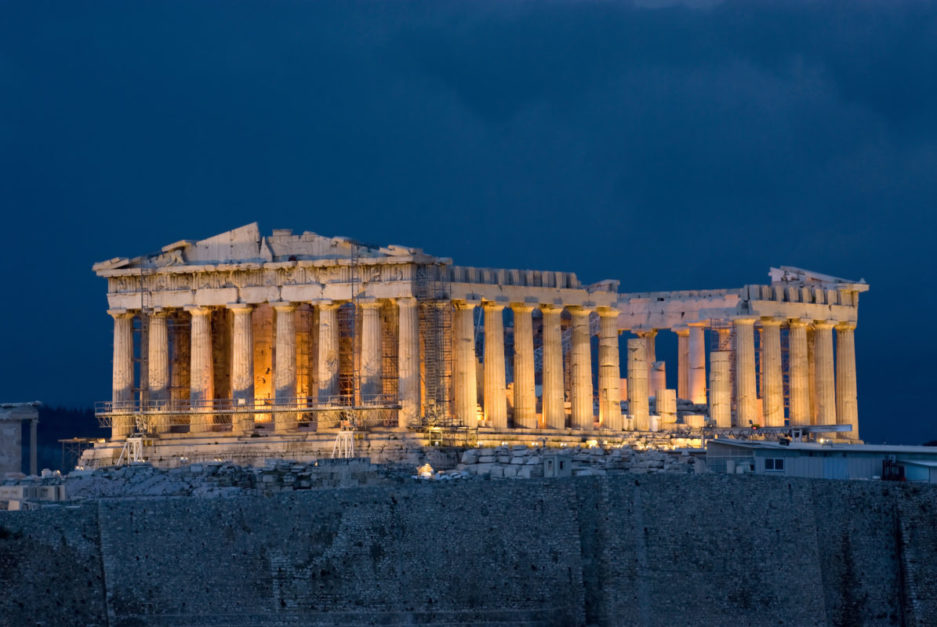 A proud monument for ancient Greece, Acropolis, located on a limestone hill; Attica plateau, towers over the city of Athens.

From between 5h and 4th centuries, this architecture has been the most recognizable and largest structure that symbolizes the history and culture of the country. A representation of a powerful sight acropolis has a dramatic effect at night and a beautifully bright and glistening effect in the daylight.

In Greek, Acropolis means high city and it refers to natural strongholds constructed on elevated and rocky grounds in Greece.

The Acropolis of Athens is one of the earliest heritage which can be dated back to the middle Neolithic era. The landmark is spread over 3 hectares and located at a height of 150 meters above sea level. In addition to this, there are more than 20 points of attraction at the acropolis mainly including the temple of Zeus and Parthenon.

One of the most important Buddhist sites in the world and Indonesia’s famous landmark is Borobudur. The visually stunning site of tropical surroundings is soothingly peaceful comprising mountains and rising volcanos from a distance.

Located near Yogyakarta, on the island of Java, this historical place was constructed in the 8th and 9th centuries AD, but after two to three hundred years it was abandoned due to volcanic eruptions.

In the 1800s, the site was uncovered by the British and then restored to its original condition as closely as possible. Currently, it remains one of the main tourist attractions in Indonesia.

One of the most stunning archaeological sites in Mesa Verde located in southwest Colorado USA, the canyon walls tucked with cliff dwellings, is an impressive sight.

It is recognized for its well-preserved Ancestral Puebloan. This historical site protects the masonry towers, pit houses, pueblos, and farming structures of the ancestral pueblos, who resided there for more than 700 years.

The entire area, inclusive of the forest-covered plateau contains a vast range of ruins. The drive to this road is along a gently twisted road that routes to the top of Mesa, from where you can enjoy the beautiful sites of canyon walls and dwellings. 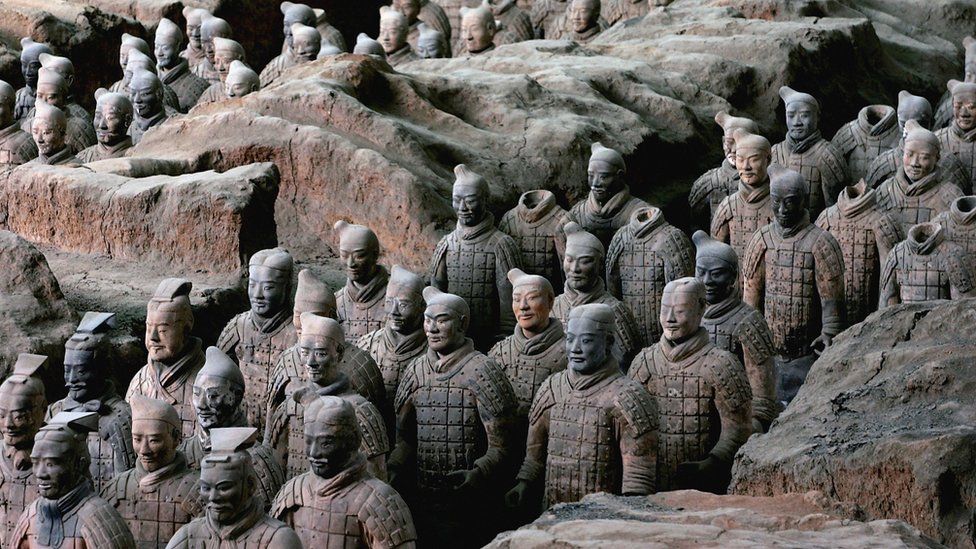 A collection of terracotta sculptures, standing guard over the first emperor of China, Qin Shi Huang.
The army contains thousands of human-sized warrior sculptures, each having a  unique face. an estimate of 70,000 workers had been involved in the construction of almost 8000 clay army.

This treasure was undiscovered for many years until a farmer while digging a well uncovered this piece of art in the 1970s.

Moreover, it is said that the terracotta army was built to guard the mausoleum and Qin Shi Huang believed that this army will protect him in the afterlife and that is why it was buried underground.

In central America, the greatest archaeological site is the ancient Mayan city of Tikal. The site is surrounded by a jungle and is located near northern Guatemala, which comprises more than 3000 strictures that existed between 600 BC and AD 900.

It is considered to be among the world heritage properties that was inscribed by the cultural and natural criteria because of its extraordinary biodiversity and archaeological importance.

It consists of 57,600 hectares of wetlands, tropical broadleaf, savannah, and palm forests with several artistic remains of the Mayan civilization. A red sandstone cliff wall that stands 71 meters tall, the Leshan Giant Buddha is the tallest stone buddha in the world.
It was started by a single monk in 713 AD. Afterwards, it was then created 90 years later in AD 803, during the Tang Dynasty. This wall looks out over the concourse of Dadu, Minjiang, and Qingyi Rivers.

“The mountain is a buddha, and buddha is a mountain” is a famous statement that is attributed to this huge statue. The giant buddha illustrates a seated Maitreya Buddha with hands resting on his knees along with a smile on his face.

There are two ways through which you can reach to have a sight of the giant buddha, either by walk or by boat. For a close-up view, you will have to go by walking along the steep and narrow plank pathways.
The second way is through a sightseeing boat, by this, you will get a panoramic view of this beautiful ancient place from a distance.

Uchisar: An Ancient Village in Cappadocia

One of the most peculiar World Heritage sites is the Uchisar village in Cappadocia. It is known to be the most ancient district in east-central Anatolia. Cappadocia is a place of stone-capped chimneys and flowing rock formations.

Around 200 underground cities are present in Cappadocia and the most visited ones include Kaymali and Derinkuyu.
The main idea behind these cities was the protection of inhabitants from foreign invasion. Which allowed several people to live their life in total secrecy.

The significance of Cappadocia is that it was one of the most important junctions of the silk road. The reason is, that it hosted trade colonies throughout history. It also discovered social and commercial bridges between countries. The beautiful ancient place is worth taking a photograph of.

This ancient place has now become the heart of turkey. 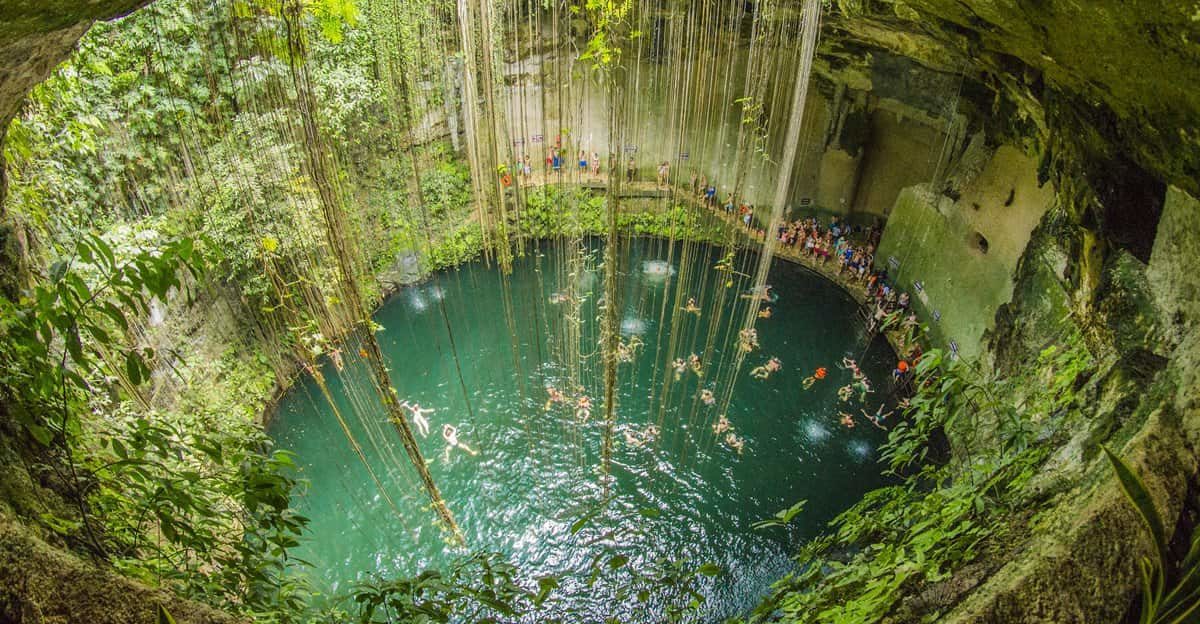 Located in the south-central Yucatan state in Mexico. According to the information available, this place is thought to have been a political, religious, military, and commercial centre for more than 35,000 people.

Chichen was discovered in the 6th century CE by the Maya peoples of the Yucatan Peninsula, who occupied this area in the Preclassic period, 1500 BCE to 300 CE.  Known for two natural big cenotes, this place has been a highlight for many years for its ancient value.

This is also the reason why it was named chi (mouths), Chen (wells). It is the name of the Maya tribe that was settled at this place. Chichen today is one of the most well restored Mayan sites in Mexico.

It offers a beautiful glimpse into its heritage and culture. The huge pyramid is one of the most popular attractions of this ancient place.

A remote volcanic island, located in the south pacific region, Easter Island is a Chilean island. It is popular for 900 giant stone monuments which are known as moas.

It is the creation of the Rapa Nui people who are believed to have colonized here from the 12th century onwards. Interestingly, the site has some of the statues that are partially toppled. Whereas others stand straight, and some are placed on the stone platforms known as Ahu.

These ancient places in the world compiled by  Graana.com showcase the greatest feats of ancient architecture and places in the world.  For people who love history and archaeology, these are the places you should definitely add to your bucket list and pay a visit to.

The Ultimate Hunza Travel Guide: Everything You Need to Know 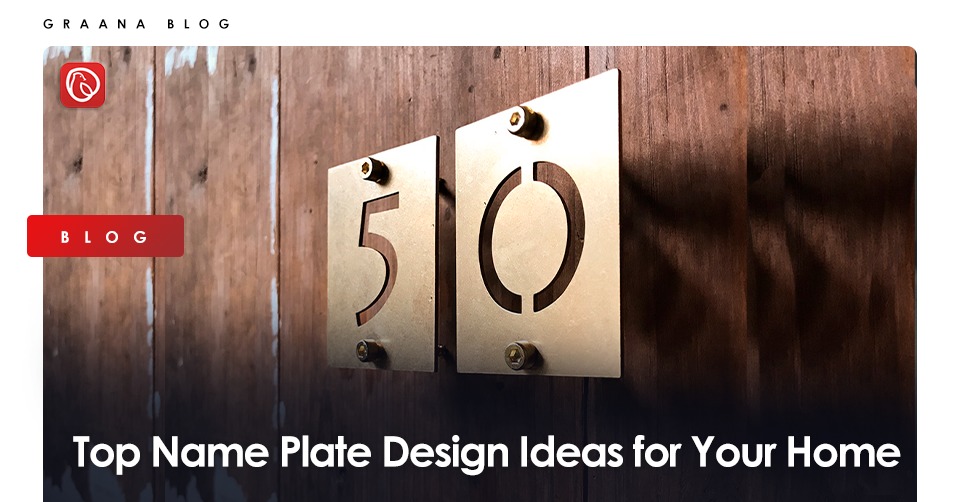