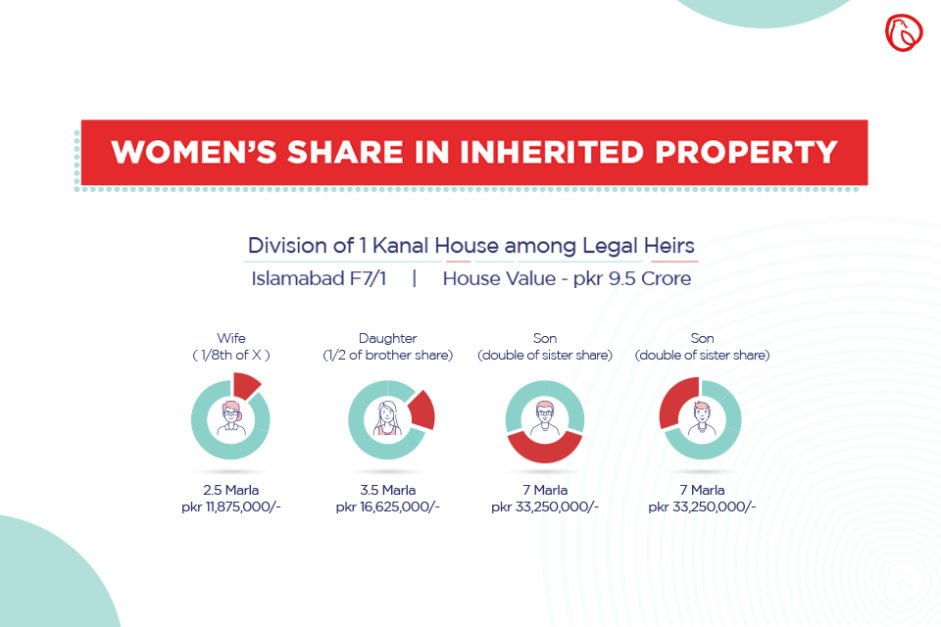 Women in Pakistan have all property rights as men do. But how often and effectively do they exercise these rights, is a matter of debate. Research shows various socio-cultural barriers preventing women from getting their rightful share in the property; however, lack of awareness appears to be the root cause. In this article, we will discuss property Inheritance Rights of Women in Pakistan property law in Pakistan and under which particular laws and regulations are they being enforced. 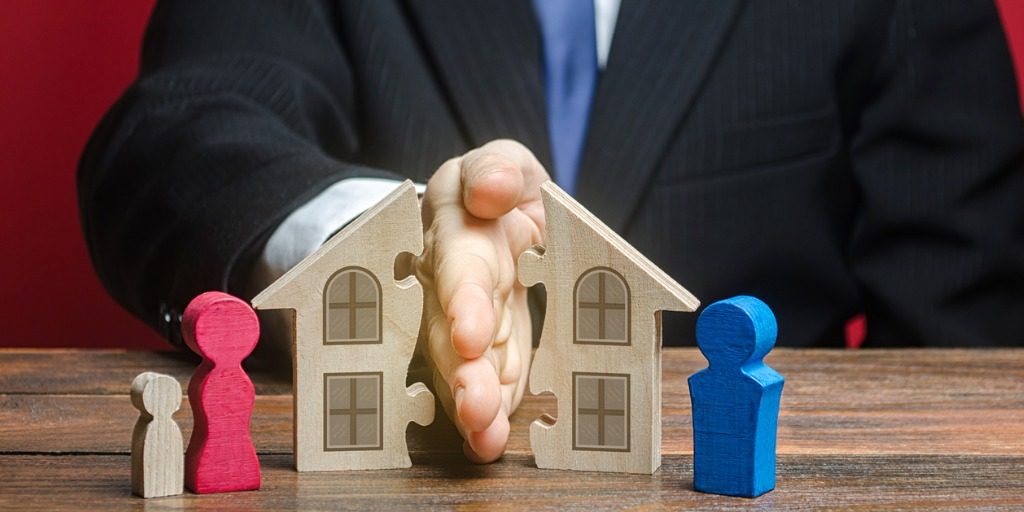 Islam provides rightful share to women in inheritance. The rights are protected by different applicable laws in Pakistan, including Muslim Family Laws Ordinance, 1961, Muslim Personal Law Shariat Application Act, 1962, Partition Act 1893, etc. Unfortunately, fair division of property inheritance law in Pakistan, particularly providing shares to women, has always been a problem in our society. In the past, they would be forced to surrender their property rights in favor of their male relations. And the excuse for this illegal activity would be that since women get a dowry, in addition to the considerable expense that is being borne on their marriages, they possess no legal right to claim a share in the inheritance.

However, under various case decisions, executed by superior courts of Pakistan, abandonment of rights in favor of a male heir of the deceased has been termed illegal. Under Section 498A of Prevention of Anti-Women Practices Act, 2011, “depriving women of inheriting property by deceitful or illegal means shall be punished with imprisonment which may extend to ten years but not be less than five years or with a fine of one million rupees or both.”

The following table outlines women’s property rights/share under the law of inheritance. It is important to note that the division of inherited property in Pakistan follows Shariah rules. Based on the number of legal heirs, their gender, their mutual relationship, and various other special conditions, the division of property may take several forms. However, it generally follows the following formula as a major yardstick.

‘X’ in this division of inherited property in Pakistan, the table is the total wealth of the deceased; after settling loans, mortgages and other balances the deceased owed to anyone in whatever manner.

Division of 20 Marla House under Law of Inheritance

For practical understanding land law in Pakistan, let’s consider 1 Kanal (20 Marla) house in F7/1 Islamabad, which was inherited by a deceased’s wife, two sons, and a daughter. The average market value of the house is Rs.95,000, 000. We assume that the deceased had no loans or other liabilities to pay and the entire value of the house was thus to be divided among the heirs. The division takes place as follows:

Division of 20 Marla House among Legal Heirs under Various Conditions

1. Deceased has a daughter as the only child

In case the deceased has a daughter as the only child, the wife gets 1/8th. The rest is divided into two equal shares. One goes to the daughter while the other to the deceased’s brothers or male cousins or other male relatives.

2. Deceased has no children

If the deceased has no children, the value of the house is divided into four equal shares. One goes to the wife while remaining three to the deceased’s brothers or cousins.

Get to know the cost to construct 5 marla, 10 marla and 1 kanal house in Pakistan.

3. Deceased has only parents as the legal heirs

If the deceased has only parents as the legal heirs, the house value will be divided into three equal shares. The mother inherits one while the father gets two shares.

4. Deceased has a wife, children, and parents

If the deceased has a wife, children, and parents, the wife gets 1/8th. The rest of the value is divided into six equal parts. The mother and father get one share each while the remaining four are divided among children.

The law of inheritance is often criticized for its ‘unequal division’ among men and women. In response, it is argued that the division of inherited property is based on the financial obligations and responsibilities men and women fulfill throughout their lives in different capacities. For instance, a husband is responsible to pay the expenses of his wife and his children; even if his wife has wealth, gifts, acquired inheritance, or she earns for herself. A wife thus has been freed from all financial obligations related either to herself or her children. Additionally, a wife has a right to claim a share in all the possessions of her husband, including any inheritance he acquires.

Apart from Inheritance, there are several other situations where women’s right to exercise ownership of immovable property gets established.

Other Situations where Women can Exercise Property Rights

In addition to Inheritance, various social and cultural practices provide women a right to own a property. And if any effort is being made to deny them any of these rights, it is a clear violation of law; which can be challenged at any competent platform.

Marriage is a social contract. Under Muslim Personal Law, in order to complete and strengthen this contract, a husband is bound to pay his proposed wife a gift, called Mehr/Dower. The quantity and form of Mehr is to be decided by both the parties. In case, a husband gives her wife 20 Marla house as a Mehr, she becomes its sole owner. She can dispose of it anywhere and anytime at her personal discretion without sharing it even with her husband.

However, for this to happen, it is necessary that the title ownership of the house is properly transferred to her name. Once transferred, the woman can exercise all legal rights to protect her property under the Property Transfer Act, 1882, Muslim Family Laws Ordinance, 1961- Section (10) and other applicable laws.

Similarly, under the Dissolution of Muslim Marriages Act, 1939, if the marriage does not survive, a wife can take along all her property that she had earned for herself. If the dissolution of marriage was demanded by wife, she would not have any right to claim Mehr. However, if it was decided by the husband, she is entitled to the Mehr.

It is a moveable or immovable property given by the family of a woman at the time of her marriage. A woman has no enforceable legal right to demand dowry, as it is generally a social convention. However, once given to her – in this case, a 20 Marla house – she becomes its legal owner and can file a civil lawsuit against anyone who attempts to deprive her of this property. As discussed, to claim ownership of the house, she needs to have this property transferred on her name.

Like men, women can execute Will in their lives. Under Sunni law, a woman can dispose of a maximum of 1/3rd of her estate without obtaining the consent of her legal heirs. The rest of it would be divided among all the legal heirs as per the law of inheritance. If the Will exceeds the limit (1/3rd), the consent of the legal heirs is necessary.

For instance, a woman executes a Will for a 20 Marla house that she leaves behind as her legacy. Technically, she can give away 1/3rd of the total property or its worth as a Will, which means either 6.66 Marla or Rs.316,666,666 in the given example; provided all loans and liabilities are already settled.

A woman can give away her entire property or any of its shares as a Gift-Hiba to anyone in her life without the consent of the legal heirs. She can also give away her property in Gifts through a Gift-Deed, by giving specific instructions that could be different from the applicable law of inheritance. Similarly, she can receive a gifted property, which can never be taken back; provided all legal formalities have been fulfilled.

So far, we discussed various situations that establish women’s rights to own and/or transfer immovable property in Pakistan. There is yet another gray area where women’s property rights are seldom admitted, though the law is very clear about it. It is the Tenancy Rights of Women.

In Pakistan, women have a legal right to occupy or possess any form of immovable property from anyone under an agreement for a specified time period. However, due to various social and cultural reasons, they fail to exercise their basic right.

Applicable laws in Pakistan, including Registration Act, 1908, The Punjab Tenancy Act 1887 among others, permit all women to acquire tenancy rights or to give tenancy rights as landowners. In the given case of 20 Marla house, if she is the sole owner, it is her legal right to carry title ownership of the house. Under the same privilege, she has all legal powers to rent out the house and become a landlord.

Similarly, if she plans to live in a rented house, she is entitled to get the rent agreement prepared and acquire tenancy rights on her name. However, different customs and social perceptions of women deny them this right and their names fail to appear on the Record of Rights. Or, if the name exists as a landowner on the Record of Rights, it is excluded from different important documents like Jamabandi Form, Shajra Nasab, etc. which adversely impact their right of ownership. Sometimes, it even deprives them of their right of inheritance, as their names do not reflect on certain documents related to Land Record.

Under the Married Women’s Property Act, 1874, a married woman is entitled to separate her share of the property and take property-related decisions in her hands. The same law provides her a right to sign contracts pertaining to her property.

Although religious and legal frameworks in Pakistan, property transfer law in Pakistan explain women property rights, in theory, they fail to protect them in practice. Research by public and private organizations finds that more than 80 percent of women in Pakistan fail to claim and exercise their legal property rights. Ministry of Human Rights and the Islamic Ideology Council are putting up some efforts which definitely will take some time to materialize. The govt. has established an exclusive helpline 1099 to report women property issues and get legal assistance. I am confident that such initiatives have a major role to play in alleviating issues like denying women’s property rights in Pakistan. However, getting heard will not resolve any problem, unless there is a mutually coordinated system that is supported by our social, religious and legal systems. In my opinion, the following recommendations will give an appropriate start to framing a more responsive system to protect women’s property rights in Pakistan:

We hope we’ve covered all the major property rights women can claim in Pakistan. Let us know what barriers you think women generally face in Pakistan when they attempt to exercise these rights.

Homes for all moods