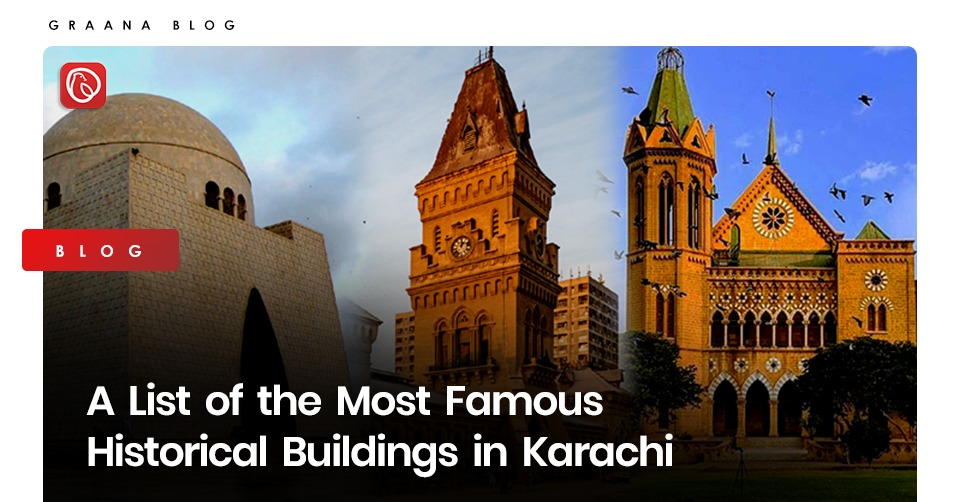 Karachi, the former capital city of Pakistan, is home to many noteworthy historical buildings. As a blend of cultures, ethnicities, and faiths, it has a unique character that is reflected by its architecture as well.

Graana.com shares some of the most well-known historical buildings of Karachi that attract a number of visitors every year.

The following is a list of some of the most popular ancient structures in this city: Empress Market was first established in 1884. It features thousands of merchants, with their stalls or pushcarts, who are selling goods, ranging from dry fruit and spices to meat and domestic animals.

This lively, bustling market has undergone many changes in over a century, but the hospitality still remains unaltered – which makes this place still as popular today. One of its biggest attractions is the central tower situated in the middle of the market.

Although there are many notable buildings dating back to the colonial era, Empress Market is especially significant because of its prime location near Saddar and M.A. Jinnah Road. It was built in honour of Queen Victoria. The architecture is a fusion of Indian and Roman elements, giving it a distinctive appearance. 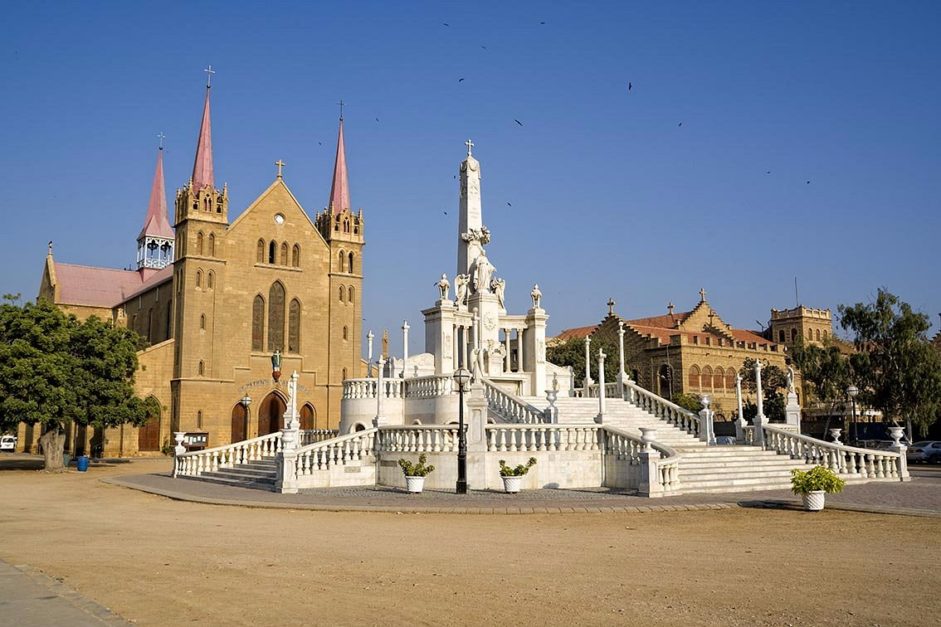 The Roman Catholic Archdiocese of Karachi is based in St. Patrick’s Cathedral, which can be found in the neighbourhood of Saddar, next to Empress Market.

The church, which can hold 1,500 people, was completed in 1881. The Monument to Christ the King, constructed between 1926 and 1931 to honour the Jesuit mission in Sindh, is located in front of the cathedral.

Under the direction of Father Casaboch, Karachi’s first Carmelite priest, this was the first church in Sindh that was constructed in 1845 as a Carmelite mission at the cost of Rs. 6,000.

Funds were donated for the building of a new church as the number of Catholics in the city increased. It was dedicated on 24th April 1881, after the foundation was laid down in 1878. After a storm destroyed it in 1885, a new structure was constructed. 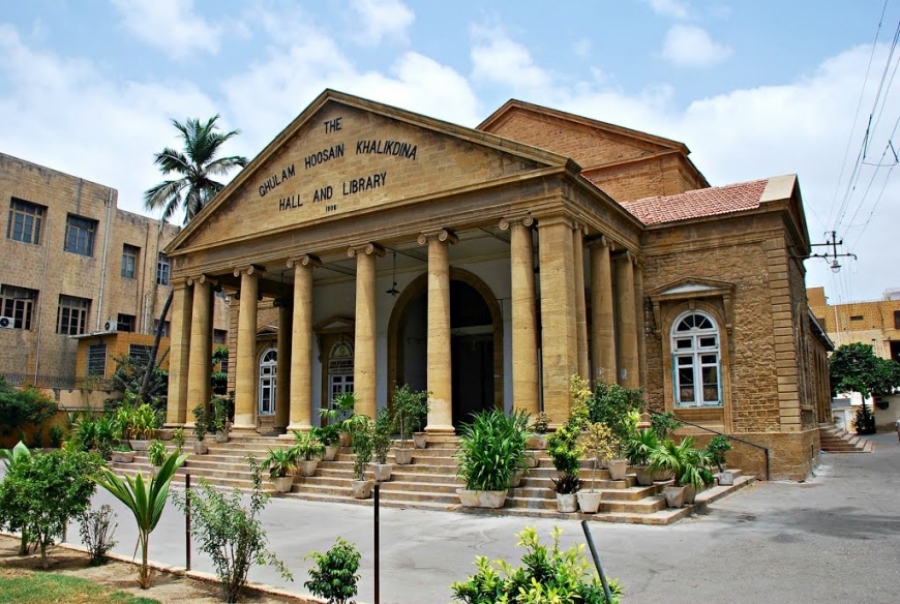 Khaliq Dina Hall, also known as Khaliq Deena Hall in Urdu, is a hall and library that can be found in Karachi. The structure was erected in 1906 and named after the wealthy merchant and philanthropist Ghulam Hussain Khaliq Dina, who wanted to provide Karachi’s Muslims with a place for intellectual pursuits.

He contributed Rs. 18,000 of the Rs. 33,000 needed to construct the structure in 1902, with the Karachi Municipal Corporation contributing the remaining amount. It currently houses a library, a hall used for various events, and a room used as an NGO’s office.

Although the Native General Library in Khaliq Dina was founded in 1856, Khaliq Dina Hall and Library was not constructed until 1906.

The “Trial of Sedition” in 1921, where British authorities tried Maulana Shaukat Ali and Maulana Mohammad Ali Jouhar for mutiny as they gave speeches in favour of the Khilafat Movement, was held in Khaliq Dina Hall.

One of Karachi’s most popular museums is the Mohatta Palace, which is also a significant historical landmark in Pakistan. The palace was formerly owned by a Hindu businessman who lived there during the summers. But, after the country’s division in 1947, the new administration bought the palace and used it to house a number of its departments.

The structure is now a museum featuring Pakistani arts and crafts. It purchased a number of historical artefacts and cultural relics to be displayed in the galleries, using cash raised by its trustees. The museum also houses several statues of notable figures of the British Raj, including those of Queen Victoria and Rajah soldiers.

The Denso Hall and Library are located in Saddar Town, right in the centre of Karachi. Completed in 1886, it was the first library that was constructed for the residents. It bears the name of Max Denso, a Chamber of Commerce chairman in the 1870s.

The Venetian gothic architecture, which includes Tudor elements on the upper floor, was designed by Karachi Municipal Engineer James Strachan. Local Parsi benefactor Rao Sahib Ramdas Morari donated the clock on top of the structure as a gift. In 2019, Denso Hall was declared a significant historic place. 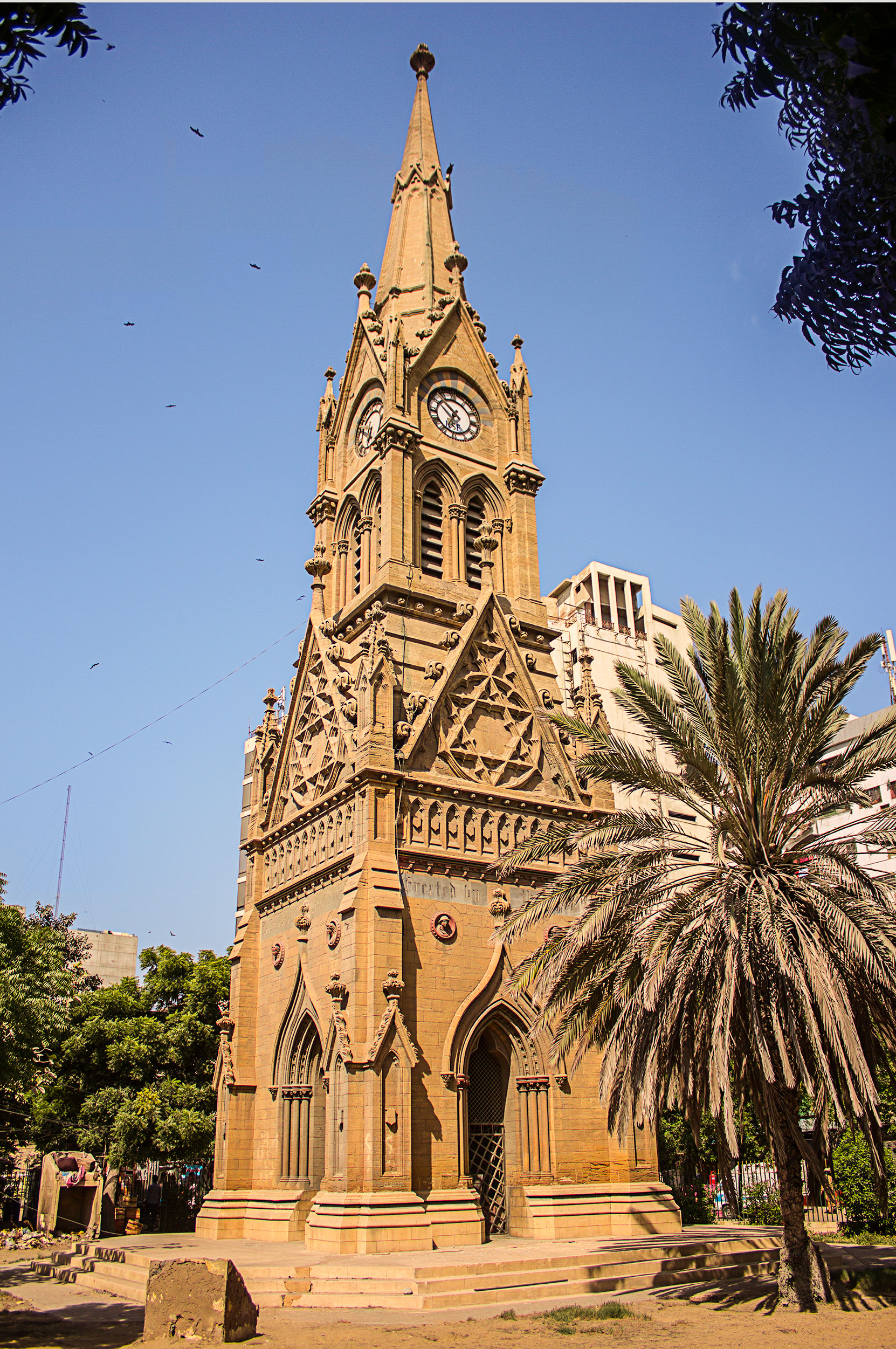 This Neo-Gothic clock tower, known as Merewether Clock Tower or Merewether Tower, was constructed in Karachi during the Victorian era. It is a prominent landmark and one of the historical buildings in Karachi that are located at the intersection of two of the city’s busiest routes, Muhammad Ali Jinnah Road and I. I. Chundrigar Road.

When entering Karachi from the port at Kiamari, the tower served as a separating line between the Old Town and the city’s newer neighbourhoods in the east. It is currently the Serai Quarter’s westernmost point.

The public contributed to the construction of the Merewether Tower as a tribute to Sir William L. Merewether, who presided as Commissioner of Sindh from 1867 to 1877. In 1884, Sir James Fergusson, the Governor of Bombay, laid the cornerstone for James Strachan’s design. The Commissioner of Sindh, Sir Evan James, officially opened it to the public in 1892, at a cost of Rs. 37,178.

Inspired by the architecture of medieval England, Strachan constructed the tower in the Victorian English Gothic Revival style (11th to 15th century CE). The building is shaped like an Eleanor cross.

The clocktower has a base of 44 feet square and rises 102 feet in height. Each facade has four clocks that stand 70 feet high, all with a 300-pound bell that strikes the hour. Smaller bells, weighing 100 pounds, ring on the quarter-hour.

Its facade has a Star of David and is constructed from native Gizri sandstone. Stonemasons from the Silawat community, popularly known as Gazdars, crafted the intricate stonework of the tower. 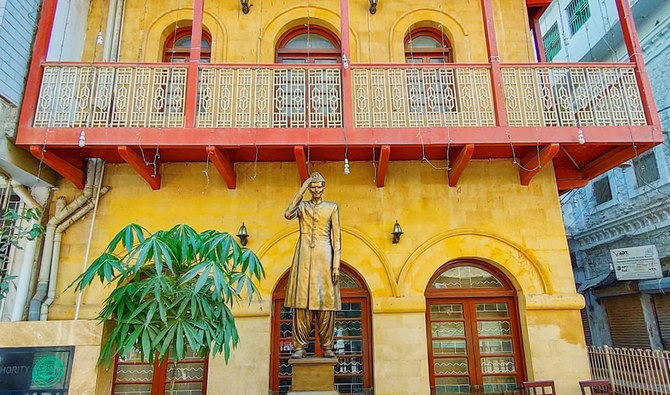 Wazir Mansion, a two-storey structure from the colonial era, is located next to Meriwether Tower in Kharadar, off M.A. Jinnah Road (Old Bunder Road). It was constructed between 1860 and 1870 using stone masonry and lime and jute mortar to accommodate Karachi’s climate. After 1874, Jinnahbhai Poonja and Sakina Bano (Mithi Bai), the parents of Quaid-e-Azam, moved to the city from their ancestral home in Paneli, and they bought an apartment on the first floor of this structure.

The founder of Pakistan was born in this home on 25th December, 1876. His family continued to live here when he went to London in 1892 to pursue higher education and relocated to Bombay later in 1898. In the 1940s, Mr. Wazir Ali Ponawala, who gave this home its name “Wazir Mansion”, purchased it from Mr. Gowardhan Das, the then-owner of the structure.

The Pakistan Public Works Department (PWD) was given the task of renovating and conserving this historic structure when the Pakistani government purchased it from Mr. Wazir Ali in 1953 and preserved it under the Ancient Monument Preservation Act 1904 (later known as the Antiquities Act, 1975).

On 13th August 1953, Wazir Mansion was given to the Department of Archaeology & Museums for proper preservation and upkeep, following the completion of urgent and essential repairs.

On 14th August 1953, the then-Governor General of Pakistan officially opened the Birthplace Museum. A reading room and library were set up on the ground floor, along with a museum on its first floor, where the artefacts connected to Quaid-i-Azam were displayed.

When the Quaid’s Relics Commission gathered some items from Mohtarma Shirin Jinnah (Quaid’s sister), the gallery on the second floor was inaugurated in 1982. 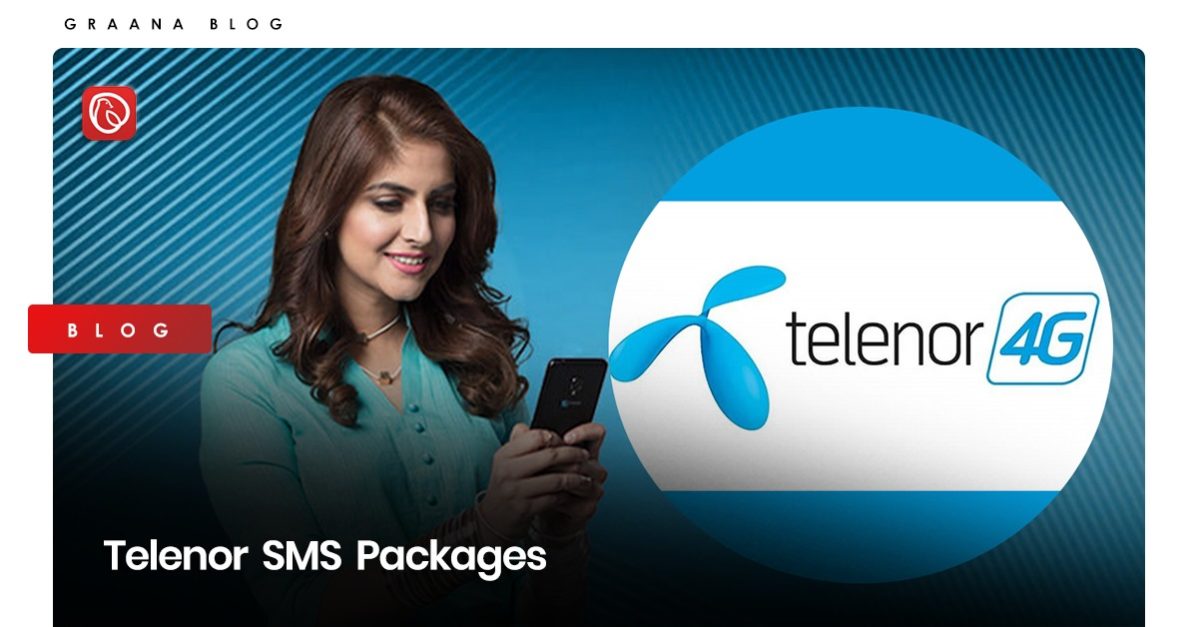